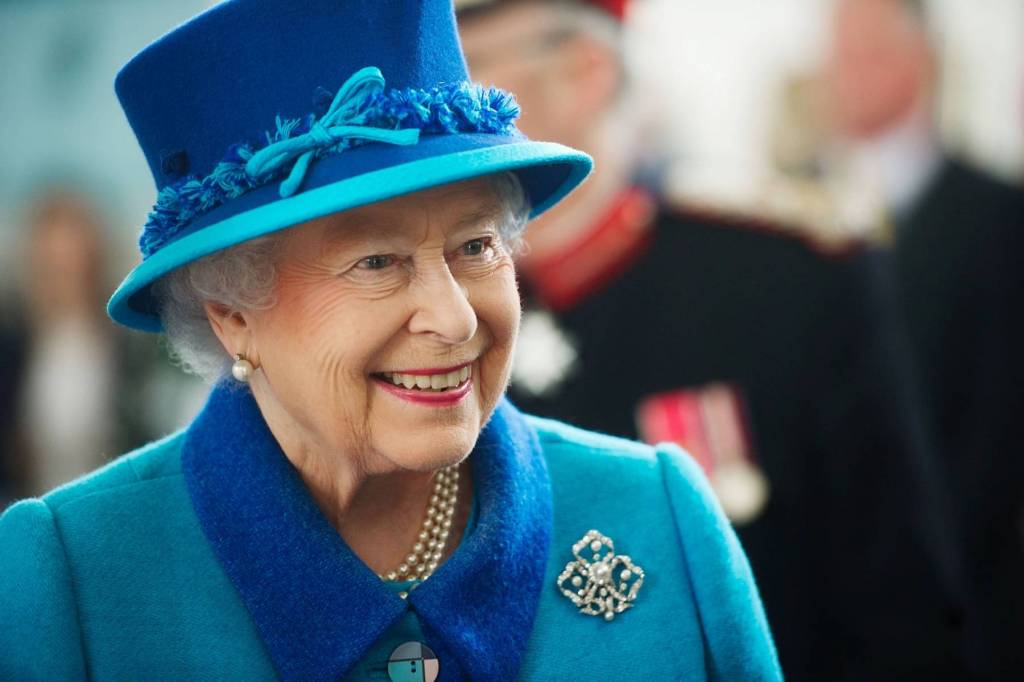 “Today we will gather in prayer and sorrow as we mark the passing of Her Majesty Queen Elizabeth. For nearly all of us, she is the only monarch we have known, she has been part of our lives and part of our prayers always.

“The Queen came to the throne at a moment of great hope. A time of rebirth following the difficulties of war. She dedicated herself to the service of this country and she has honoured that pledge, especially so when things were difficult. She never wavered from her service.

“Queen Elizabeth was steadfast in her faith, in her prayers and worship. She spoke openly and often of her devotion to God, and to the Christian message of respect and the value of people, of all faiths and none.

“Here in Scotland we know that the Queen found space to relax and to be amongst family and friends, we cherish the knowledge that she loved this place as much as we do. That knowledge brought a shared connection that many of us felt deeply.

“Today we will share memories and sadness. Her Majesty understood and believed in the promises of God. In her many statements over the years she spoke always of moving forward, serving the country that she loved, and giving thanks to God for the life she lived.

“May she rest in peace and rise in glory.”

Go forth upon your journey from this world,
dear child of God,
into the hands of the Father who made you,
to find life in Christ who redeemed you.
to rejoice in the Spirit who renews you.
May the heavenly host sustain you
and the company of the redeemed enfold you;
may peace be yours this day,
and the heavenly city your home. 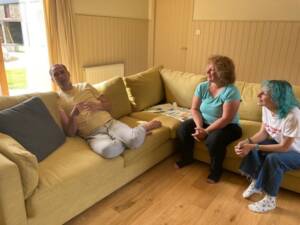 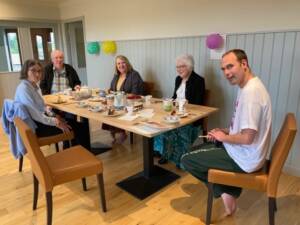 Getting to know more about Louis

Many will have heard or read about Louis Sainsbury from Comrie, his profound support needs, and the tireless and valiant efforts of his mum, Kate in striving to give him a better quality of life in the development of Appletree Community.  Louie is looking forward to being able to live permanently at Appletree as soon as staff are recruited and sufficiently trained.

His mother, Kate, provides the following insights into Louis’ situation and the transition to Appletree:

What a terrible existence for Louis to have to live in a locked ward, where staff must work in pairs because of the danger from other patients; the sound pollution he endures in the tormented shouts of fellow patients, emergency alarms activated by staff out of fear, raised staff voices;  living with adrenalin-filled fear and uncertainty of when he is going to leave hospital ‘bye bye hospital’; the lack of purpose in his hospital existence; the crushing contrast between relaxed time spent in his own house ‘Louis’ house’, with mum and trusted care team, the fear that overshadows these visits from the prospect of returning to hospital.

What a brave man to endure this.  His resilience goes back to my mother’s lifelong example of loving constancy, laid down in Louis as habits of expression of love for family and friends, .  the meaning and purpose, I have tried to give him, through holding out a future towards which he surely makes his way: ‘macaroni cheese and coleslaw; here,, ‘the beach’ there, a telephone call with Uncle Nick there.  Focused in this way towards the future, with the addition of activities in his house in which he has agency, cooking, trampolining, stacking cushions off sofas, he makes sense one day at a time.  Even if the horribleness overwhelms him and he falls back into OCD behaviours, seeking to destroy a specific item of equipment, trauma-response behaviour, shouting, even if there is an incident when staff pull an alarm on him and lead him with his arms behind his back and sedate him, he knows that he can ‘put it behind him’ and with the encouragement of his wonderful Key Worker, his staff team and myself, he can move on to a fresh day.

Other times, we simply sit alongside him as he sobs.  We put cream on the finger he digs his nail into, making a mark, expressing the pain of his incarceration.  And then his natural optimism returns and he looks up with a grin.  ‘No way, José’ he says.  And we grab at that moment of wellbeing and build on it.

His care team note and speak about the terrible difference they see in Louis, not only between his being at home and being at hospital, but also the difference between being indoors in hospital, when he is most at his fearful, and outdoors, in the gardens. They too want Louis out as soon as can safely be achieved.

How heartbreaking it is as a mother to be helpless, to have to stand alongside, unable to solve the dilemma that there are not enough staff to let him leave hospital.

The house is ready, the small nucleus of a care team is in place, has been in place for months, is learning about Louis all the time, but still we need five or six more.  I am powerless: this is the remit of the care agency, in a national post-Covid, post-Brexit context where there are too few candidates for jobs across all sectors.  Meanwhile, he must go on living this agonising existence.

It is draining as well as heartbreaking.  In the last three years I have driven 70,000 miles: in the first instance backwards and forwards to Hartlepool where he went for 8 months in 2018; since then, the 100 mile trip to Dundee, where he has been locked up since January 2019.

I have no days off, just a couple of hours here and there in a less-busy day: and the pleasure of time with Louis, with his care team, the support of a prayer group, seeing the project develop, extending our pray to care for others, noticing planets in the sky, being thankful for everything that is… even the hardship, for what it teaches, for the bedrock of trusting God, for the development of Louis as a person, and the love that is all around us.

It’s currently a busy, turbulent, transition time. Louis is living in hospital still, with all its constraints and unhappiness for him, but regularly spending nights at Appletree and moving on to multiple nights, some with me, and some with staff.  Simultaneously we are recruiting new staff, some are going through training, we are laying down systems in the house – for example, cooking, shopping, planning activities, cleaning, mutual support for each other: staff, myself, Louis.

I think of the disciples in the boat in the storm-tossed sea, fearing they were drowning – and Jesus calming the seas, rebuking them for their lack of faith!!  Yet even in this time of uncertainty, I completely trust that this is God’s call and vision and that as we live each day at a time, we are supported.  We are surrounded by wonderful people sent to support us and we are making progress! 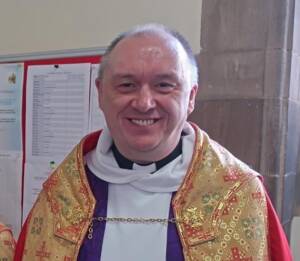 I am very pleased to announce the appointment of the Very Revd Graham Taylor as Dean of St Andrews, Dunkeld and Dunblane, in succession to the Very Revd Kenny Rathband, who retired on 31st August 2021.

Graham continues to serve as Rector of St John the Baptist, Princes Street, Perth, where he has been since 2014, becoming a Canon of St Ninian’s Cathedral in 2019. Before coming to this Diocese, Graham served in several charges in the Diocese of Aberdeen and Orkney, where he was ordained in 2001.

The role of Dean is one of the most important in the life of any diocese. It includes support for the Bishop’s ministry; sharing in leadership of the Diocese with the Bishop and others; encouraging the clergy, lay ministers and vestries of the Diocese; and fulfilling the other duties specified in the Code of Canons.  Graham brings to this ministry his love of the Scottish Episcopal Church, his long experience of congregational ministry, his priority of pastoral care, and his warm sense of humour!

I am very glad that Graham accepted my invitation to become Dean, and I am looking forward very much to welcoming him as a colleague and adviser, and to helping him as he settles into this new ministry.

Graham will be Installed and welcomed, in the presence of many more people, at a full Diocesan service at the Cathedral before Advent. At that service other Canons, appointed during lockdown, will also be installed, and we will be able to thank Kenny Rathband as retiring Dean.

Please welcome Graham, and pray for him as he becomes Dean of St Andrews, Dunkeld and Dunblane. 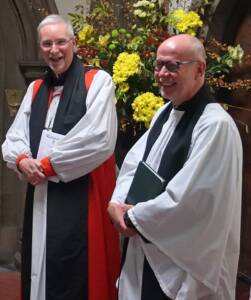 Many in the Diocese and beyond have been giving their support and care to our Dean, the Very Revd Kenny Rathband and to Ruth in the months since Kenny had to step back from active ministry because of a serious health issue. They, and all of us, have had to come to terms with his early retirement from full-time ministry which Kenny’s doctors advised. As Kenny wrote to us about making this difficult decision: “This has not been an easy decision to make and follows on from my recent heart attack. I have greatly enjoyed working with both congregations, and the privilege of being Dean for a number of years. I continue to hold everyone in my prayers.”

Kenny’s last day as Dean of the Diocese, and as Rector of Dunfermline and Priest at Rosyth, was on 31st August, and he retired from 1st September.

2 Bishops of St Andrews, Dunkeld and Dunblane, Bishop David and Bishop Ian, the clergy who have served, and each vestry and congregation, have so much to thank Kenny for in his 14 years as Dean of the Diocese. There will be a significant Diocesan service – before Advent, we hope – at which the Diocese will express its thanks to Kenny, and celebrate his 14 years service as Dean. Congregations and individuals may wish to contribute to the Diocese’s gift which will be presented to Kenny and Ruth as a sign of appreciation and love. Details of where to send contributions will be announced shortly.

Please continue to hold Kenny and Ruth in your prayers as they prepare to move into a new chapter of life for them. And please pray for Holy Trinity and St Margaret’s as they begin to seek a new Rector and a new Priest-in-Charge.

Welcome to the Revd Jonathan Connell and his family as they join the Diocese. Jonathan will be Instituted as Rector of St Andrew, Callander and St Mary, Aberfoyle on Saturday 14 August. Please pray for Jonathan and his family, and for the two congregations, as they enter a new chapter. 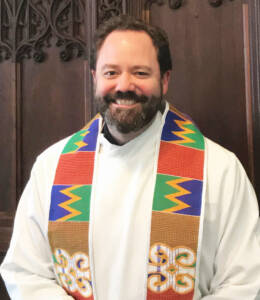 Elizabeth has put together a special edition of our E News to celebrate 100 years since Mary Sumner died.  I hope you will take time to read the history she has put together to remind ourselves of the wonderful person she was and the amazing legacy she has left.

She considered herself an ordinary wife and mother but saw a need and with God’s help tried to find a way to  meet it; so pause for a minute to think what we could achieve if we followed her example.

With my best wishes and prayers