During COP 26, the World Council of Churches asked the SEC for an example of a local initiative that has been undertaken to tackle climate change. An article, about the installation of solar panels at Saint Andrew’s, St Andrews is now available here on the WCC website. An extended version appears below: 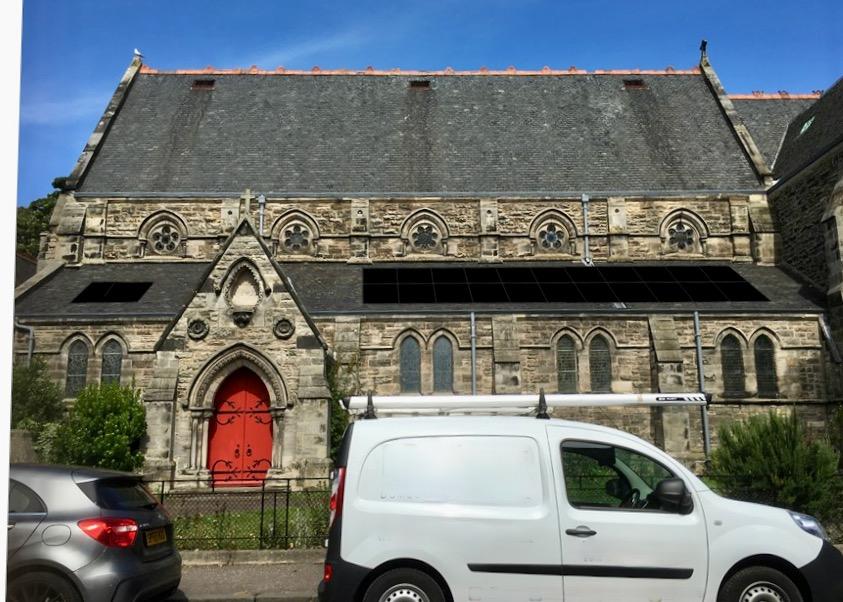 A Scottish Episcopal Church has become one of the first churches in Scotland to obtain planning permission for the installation of solar panels on a listed building situated in a conservation area.

Saint Andrew Episcopal Church, in the ancient town of St Andrews in Fife, was recently given the green light to install 22 photovoltaic panels and two hot water solar thermal panels on the roof of the church building, to help reduce the church’s carbon emissions.

The panels would represent the third phase of work to reduce the carbon footprint at the church, after most lights were changed to LEDs ten years ago, and then last year the church hall was fitted with secondary glazing to improve insulation as part of a project which also saw the hall and office lights replaced with LEDs and the introduction of a smart control system for heating. These measures are expected to cut emissions by up to 30 per cent at the hall, which is a popular venue for church and community events.

The second phase (secondary glazing) was helped by the award of a grant from the Community Climate Action Fund, and was relatively straightforward compared to the third phase (solar panels). At first, the application for permission to install solar panels looked doomed. Ten years ago, an initial application was rejected, but a further application this year was considered worthwhile.

“We have a listed building in a conservation area, and the rules were that you can’t get permission for solar panels in such circumstances,” says David Cole-Hamilton, treasurer at Saint Andrew Episcopal Church. “I reckon that we would have got the same answer if we had tried again a couple of years ago. However, times are changing. There is a recognition that the need for conservation has to be balanced with the desire to cut emissions.

“It’s probably among the first successful applications in a conservation area with a listed building in Scotland, and I do believe that this could be a precedent for other churches who want to install solar panels.”

The south-facing panels will not sit on the main roof of the church, but instead on the lower roof of the south aisle of the building. In this position, the panels will be less visible, which can be one of the main objections to such applications.

The third phase also includes the installation of a battery, for those rare times when the sun does not shine on the north-east of Fife, and Professor Cole-Hamilton estimates that the solar panels will generate seven megawatts of electricity per year, which is well in excess of the church’s annual consumption of five megawatts, thus cutting costs as well as emissions.

“I am absolutely delighted we have received permission for the panels,” says Professor Cole-Hamilton. “We are definitely moving in the right direction in terms of reducing our carbon footprint.”

The church is now applying for grant funding to help with the third phase plans, and has put the proposals out to tender. Professor Cole-Hamilton hopes that the work can be completed in the spring, “in time for the return of the sun”.

Meanwhile, the congregation is also being encouraged to think about what they can do as individuals. The ‘Green Ticket’ initiative at Saint Andrew’s offers a means – paper or online – by which members can submit the total carbon they have saved through making intentional changes in personal travel, food, home energy or lifestyle. These carbon savings are collected and reported as part of the church’s commitment to reducing carbon emissions as an act of worship and faithful living.

“The church first introduced this ten years ago, and it has been given new momentum of late,” says Professor Cole-Hamilton. “People let us know when they have given up a car, or taken the train to Europe instead of flying, or simply used a bicycle locally instead of making a car journey.

“We have saved eight tonnes of carbon dioxide since May, although some of the figures included in that tally are year-long pledges.

“The mindset is catching on. It’s a good resource, and could be rolled out elsewhere quite easily.”

Further details of the Green Ticket Scheme can be found here.