Mothers Union members of the Diocese of St Andrews, Dunkeld and Dunblane with Brechin Diocese held their first Silent Vigil on Saturday 27th November, a day that was bright and sunny, yet with an amber weather warning for fierce winds for Perth, courtesy of named storm ‘Arwen’.

Several of our members, especially those living in areas for which there was a red weather warning (signifying a risk to life), had reluctantly accepted that it was much too dangerous to be outdoors and that, instead, they would support us from home in prayer.

Accordingly, only a small group of Mothers’ Union (MU) members and supporters, including our Bishop, The Right Revd Ian Paton, were able to gather at St John’s Episcopal Church, Perth for the Silent Vigil.  In our Christian tradition, worship is normally carried out indoors, but well fortified by tea/coffee and biscuits, we moved outdoors to the courtyard garden of St John’s Church to deliver our witness in public view.

We were led in prayer by Revd Kim E Lafferty, Rector of ABC Saints and an MU member, who had created this service for our event.  As our campaign was focussed on the fact that 1 in 3 women globally are victims of violence or domestic abuse, we wore the MU purple scarves and badges carrying the logo ‘no more 1 in 3’ and had MU leaflets to hand out to passers-by giving details of the annual United Nations campaign ‘16 Days of Activism against Gender-Based Violence’.  We opened with a welcome and call to worship, moved through opening prayers and confession, to a bible reading.  Next, came very moving intercessions where Revd Kim led us in naming and praying for an end to the domestic and sexual abuses that our society traditionally hides or ignores.  Revd Kim then removed her MU scarf from around her neck, refastening it over her mouth, powerfully symbolising that abused women often have no voice, before leading us into silence from 1.03 pm – 1.06 pm.  Our worship ended with closing prayers and a blessing.

I found it enormously refreshing and empowering to worship outdoors with like-minded individuals, bearing witness to my faith and publicly naming and shaming the various forms of abuse that have been a scourge to our society for generations.

Diocese of St Andrews, Dunkeld and Dunblane with Brechin Diocese 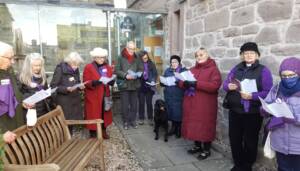 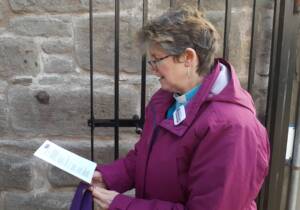 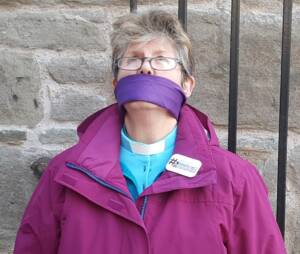 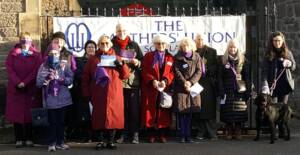